One of Chris' friends asked him back in May if he would do a sprint triathlon with him.  Chris said no way, but that I might be up for it.  I've actually always wanted to do one.  I swam on my high school swim team and have always loved to ride a bike (you can't survive 4 years at UCSB without being a pro on a bicycle).  Even though I don't like running, I've done a few 5k's and even ran a 10k a few years ago.  So, a triathlon has been on my "bucket list" for a while and I figured why not now!  Once I committed to the training, Chris took up the challenge as well, and we ended up both doing the Carpinteria Sprint Triathlon on Sunday, September 25.  It was a 1/2k swim, 15k bike, and 5k run.  Being that neither of us are the most dainty of people, we qualified to race in higher weight groups.  Chris raced as a Clydesdale and I raced as an Athena! 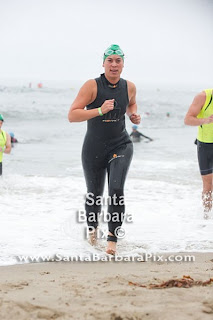 I felt pretty good coming out of the water.  During the training, my biggest challenge was overcoming my fear of open water (you know...all those creatures!)  After a few ocean swims I realized I didn't really even think about it when I was out there swimming. 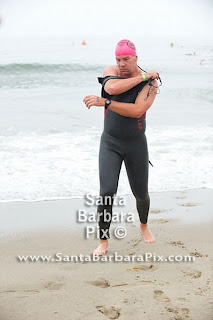 Swimming was the most difficult for Chris.  This is true for many people who do a triathlon, so he's not alone.  He trained a lot in the pool just to be able to swim a long distance and not drown!  He did great! 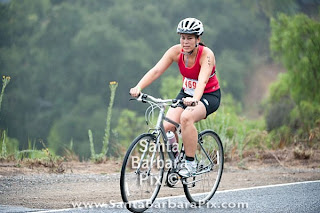 It was raining during the race, so the roads were pretty slick.  We saw quite a few people skid and take pretty hard falls. 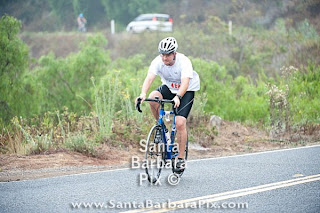 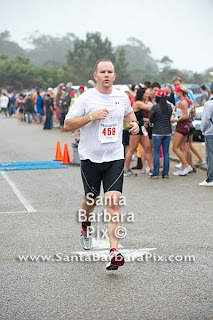 I struggled through the run part with a strained calf muscle that I had been nursing for the last month of my training.  I managed to hobble the last 2 miles and wasn't that much slower than my normal slow running pace! 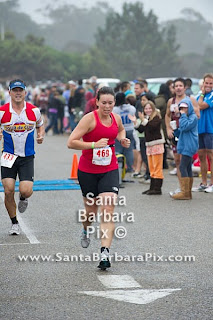 We finished and survived!  We are even planning on doing it again next year! 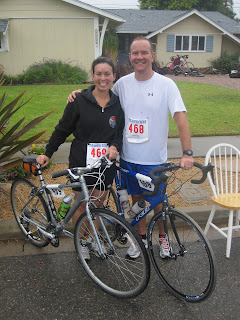 Do we have a future triathlete on our hands? 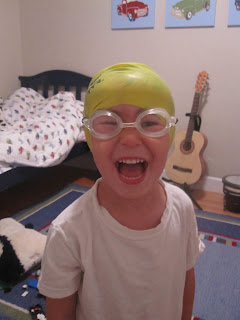 Posted by Rebecca Chapman at 8:20 PM