Just last week I was convinced that Nicholas was no where near ready to ride without training wheels. He's always been a very cautious child and doing things that are scary is very difficult for him (completely opposite of Samantha). Well, Chris has been determined to get him to do it and the other day it just happened. He's been going out almost every evening with Chris and makes huge strides every time. I finally got out there with the camera to record his proud accomplishment. He still needs a little work on starting and stopping, but once you get him going he's off! 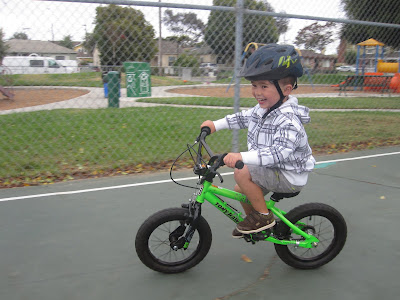 Well, poor Milka is getting some extra attention this week. She's had a lump on her back for almost a year now. The vet had said it was most likely just a cyst. We could remove it but it may just come back. It wasn't bothering her, in fact I don't think she even knew it was there, so we decided to leave. Well, a few nights ago she definitely started noticing it, it seemed to be getting bigger, and the next day it ruptured. We took her to the vet and she is scheduled to have surgery to have the whole thing removed. So until then (and I'm sure after the surgery too) she has to wear "The Cone of Shame". She hates it and seems to bump into EVERYTHING with it, including our shins! She could seriously do some damage to Nicholas and Samantha so she's been hanging out outside a lot...sad! 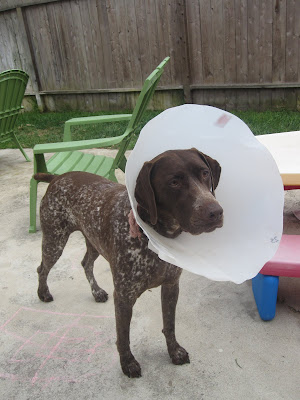 One more picture for fun. We finally got a few tomatoes late in the season due to the very cool summer we had. This one was so strange I had to take a picture of it. Chris was horrified by it, and actually said he wouldn't eat it...but he didn't even notice it once it was in the food (and still doesn't know he ate it. Ha ha!) 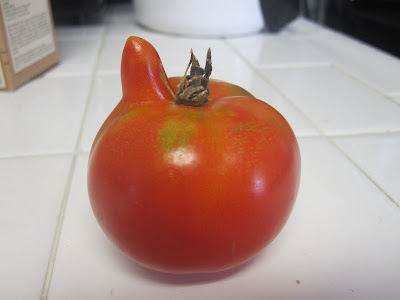 Posted by Rebecca Chapman at 2:37 PM