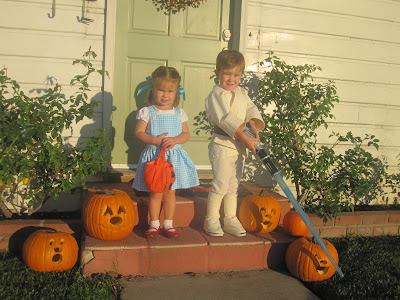 I decided to be a little bit crafty this year and make Nicholas and Samantha's Halloween costumes. Nicholas was Luke Skywalker and Samantha was Dorothy. Nicholas has never seen any of the Star Wars movies in their entirety, but still loves all things Star Wars (but what kid doesn't!) Neither of them have ever seen The Wizard of Oz. After explaining the movie to Nicholas he almost had all of us dressing up as characters from Oz. He was going to be the tin man, Chris would be the scarecrow, and I was to be the lion, but I quickly talked him out of it... :) Samantha still has no idea who Dorothy is, but she was darn cute! 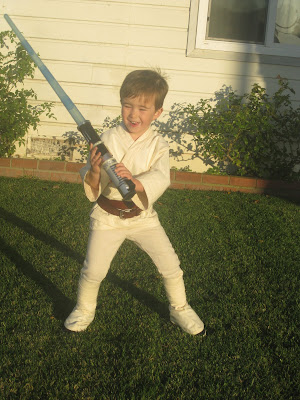 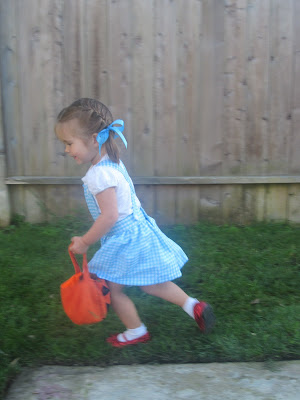 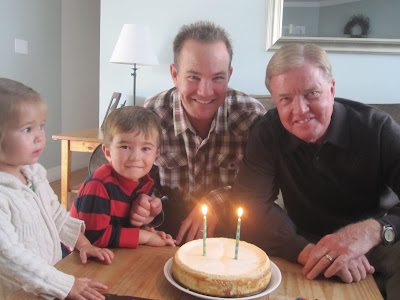 For those of you who don't know, Chris and his dad share the same birthday. Both Nicholas and Samantha were born in April which is my birthday month. Samantha was due on April 3rd, one day after my birthday and everyone kept saying how much fun that would be for us to share a birthday. All I kept thinking is that the last thing I wanted to be doing on my birthday was giving birth to a child! But, I guess with a father and son, it's a little different. Cindy did all the work and Larry was given the best birthday present ever! Earlier in October we had a birthday dinner for all the October birthdays; Larry, Chris, Chris Benton (Chris' step brother, who's birthday is today!) and Jameson (Chris' brother-in-law). Last Saturday (on Chris and Larry's actual birthday) Larry and Patti were in the area, so we got to have lunch with them and they came over to share some homemade cheesecake (a recipe from Patti's mom).

Here's a cute video that I have to share. For some reason, "lollipop" is by far Samantha's favorite word. It may even have been her first word and she puts her own little twist on it which makes it even cuter. Click here to watch.
Posted by Rebecca Chapman at 3:44 PM